Fixed: You can now earn Steam Achievements again! Some of them will be granted to you, some will require doing the required actions again. Sorry, we missed it during the Release

We’ve been going through your feedback when adjusting our plans for this update because we want to make the game better for everyone, and not just follow our original plan without adjustments! 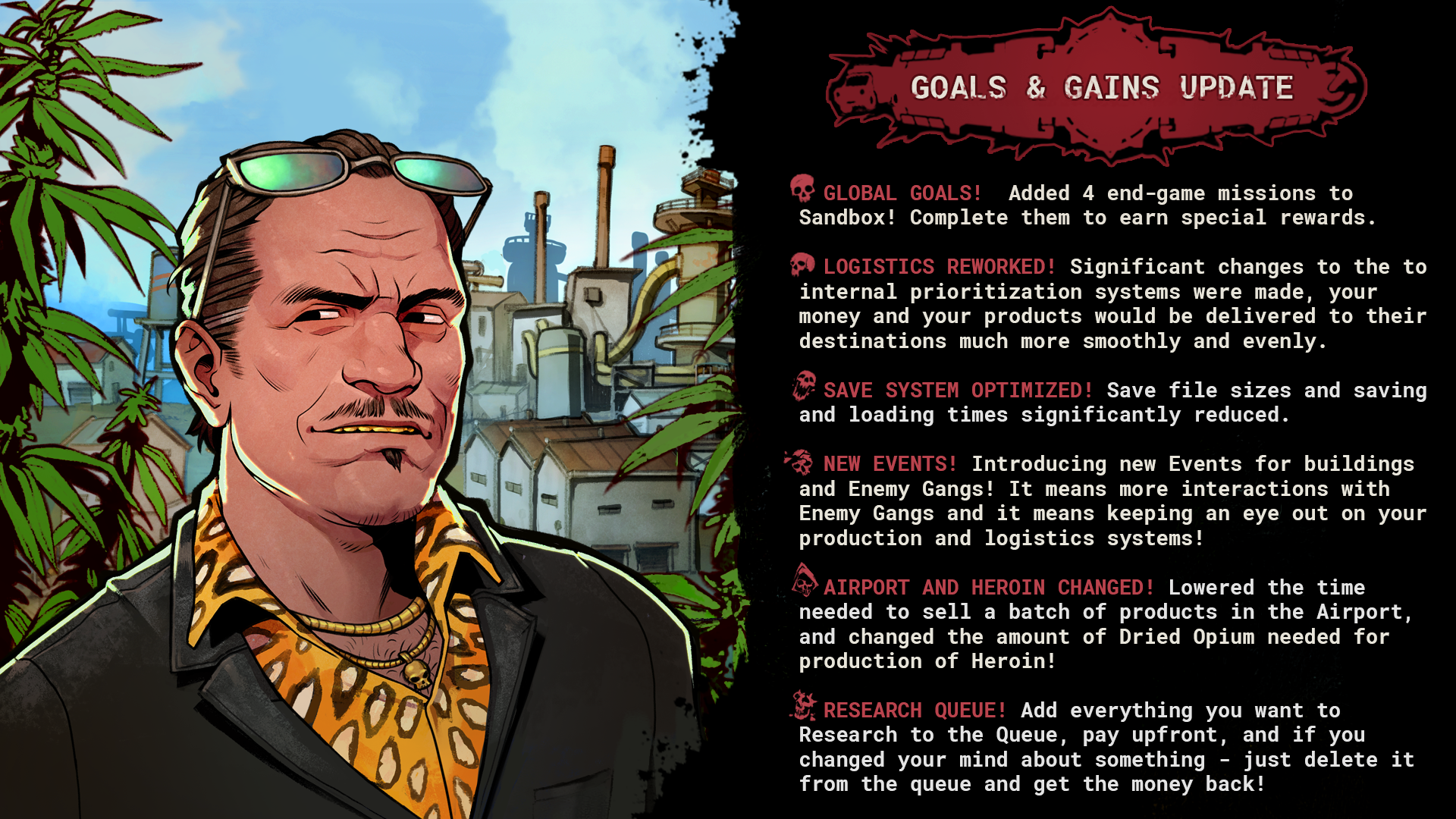 We’re adding 4 end-game missions to Sandbox! Just playing around can be fun, but having a goal in mind can be even more fun! You can choose your own Global Goal when starting a new Sandbox Game, and if you complete it - you’ll get a special reward! It’s Sandbox, so you can choose your own way to approach this goal! Global Goals Unlocks can be obtained only on standard Sandbox Settings (easy, medium, and hard)

We’ve made significant changes to the internal prioritization systems, so your money and your products would be delivered to their destinations much more smoothly, and situations, where one of your buildings stays completely empty while the other is overflowing with produce, won't be happening. We've also remade priorities for Residencies, so the Residence doesn't deliver all the money to laundering buildings without leaving anything for the production chain upkeep.

We’ve been doing a lot of optimizations under the hood and updating how our saving system works. We managed to shrink the file size for saves 20x! The saving process itself is 10 times faster, and loading times tripled in speed. When you start your game for the first time, it could take some time to optimize your old saves but it should be smooth sailing after this!

Add everything you want to Research to the Queue, pay upfront, and if you changed your mind about something - just delete it from the queue and get the money back!

We’re introducing new Events for buildings and Enemy Gangs! It means more interactions with Enemy Gangs and it means keeping an eye out on your production and logistics systems!

We heard that Heroin wasn’t as satisfying to produce, so we changed the amount of product that is needed to make it! We've also made adjustments to its Market fluctuations. These changes will make this drug MUCH more desirable to produce!

We've lowered the time needed to sell a batch of products, so your Lieutenants can be available at a faster rate while still selling the same amount of produce, which will make it a more desirable Special Building to control!

- We've optimized the map, so now it shouldn't be obstructed by the interface, no matter your screen size. Rejoice, Ultrawide users!
- You can cancel any Lieutenant ability now! Stop them, and they'll go to the nearest Friendly Building!
- Added Global Unlocks to the ESC Menu. Check what and who you want to unlock during the game!
- When you reopen the Research Tree you’ll be in the same position you were when you closed it!
- Added Lifetime statistics to Building Statistics Menu
- Added new unlocks for completing Global Goals
- Lieutenants can escape Prison if the player ignores Prison Events from Lieutenants
- Lieutenants can be killed in Prison if the player ignores Prison Events from Lieutenants
- Now there's a greater chance of the Lieutenant's death in Prison
- Pressing the "Inspect" button in the Quest Menu now teleports the camera to the building this Quest is related to.
- Added a loading screen before the Main Menu appears when you start the game. It also loads much faster!
- Terror Scale now appears at the start of the "Needs and Fears" campaign.